The lead product, Hupresin®, makes it possible to purify efficiently butyrylcholinesterase, which should facilitate its large scale production. The innovative Hupresin® technology results from the combination of two elements: a custom synthesized compound called huprine having an appropriate affinity for cholinesterases and a selected solid support on which the huprine ligand is grafted. The resulting affinity resin has perfect characteristics to specifically bind cholinesterases, providing the best performances on the market.

The Hupresin® technology and the synthesis of huprine derivatives are internationally patented (WO2011124712 & WO2015077317). In addition, our R&D team continues to develop new ligands for manufacturing of new more efficient resins for the purification of BChE.

Watch our video about Hupresin®!

Hupresin® AC ligand has been grafted on a Fast Flow Sepharose matrix. This new affinity resin has proven to be efficient for the purification of plasmatic butyrylcholinesterase. Hupresin® AC is available in 10 mL, 100 mL and 500 mL batches.

Hupresin® magnet is the magnetic version of Hupresin® resulting rom the grafting of a hupresin derivative on a magnetic solid support. The research and development platform of CHEMFORASE is now working on the optimization of Hupresin® Magnet to provide the best performances. This technology might facilitate the development of diagnosis tool useful for proving exposure to nerve agents and for identifying the type of poison involved. Hupresin® Magnet is available in 500 µL batch.

Watch our video about Hupresin® Magnet!

Butyrylcholinesterase from human plasma is a potential drug candidate that can be employed in several therapeutic fields. Enhancement of endogenous levels of hBChE can: 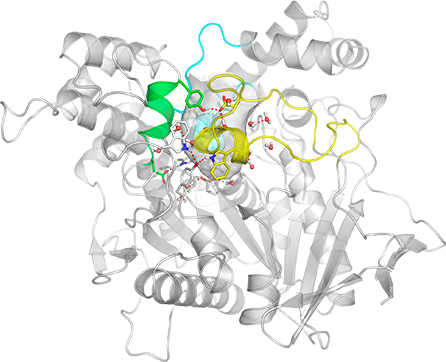 It can be used either prophylactically or as a treatment drug. While production of hBChE by genetic engineering methods provide reasonable quantities of the enzyme, the purification step still remains limited in terms of efficacy and time. Our new affinity gel, Hupresin® , has been proven to be superior to the classical methods for purification of both recombinant human BChE and plasma BChE because of its higher binding capacity and its higher specificity for hBuChE. A single purification step can yield larger quantities of highly pure BChE. This new chromatographic support will help to reduce the costs associated for the production of BChE-based drugs such as nerve agents bioscavengers.

By continuing to browse this site, you accept the use of cookies to offer you services and proposals tailored to your interests . To learn how to manage these settings, Click here.